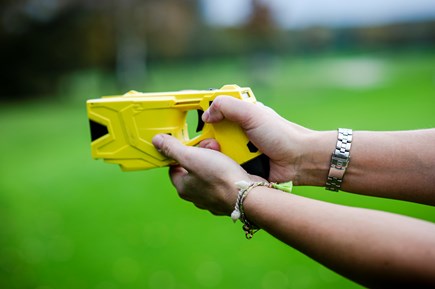 Tasers are to be made available to every Leicestershire Police officer who wants one and who is in a role where it’s needed the force has announced.

The Home Office has released an extra £10million for Tasers for policing in England and Wales.

Speaking in his weekly video message, Leicestershire Police Chief Constable Simon Cole says the rollout will focus on uniformed response teams, as they bear the brunt of the injuries and violence officers, face every day.

“97% of assaults happen to uniformed response officers, and this is an important piece of work we’ve carried out with Leicestershire Police Federation,” he said

“We also carried out a public poll which showed that 90% of our public believe we should have Tasers.

“While the discussion tends to be about them protecting police officers, Taser also protects the public and allows us to deal with incidents involving the public more effectively.

“We know from our research that incidents in which members of the public are detained using a Taser they are less likely to get injured than if we don’t use it,” he added.

“It’s a big decision from the force and one we have thought about closely, but more Tasers will be coming.”

The increase in Taser provision in the county has come on the back of a Leicestershire Police Federation and force survey revealing huge support for its use among officers.

75% of all respondents to the survey said they wanted to see all officers given Taser, while 78% of Leicestershire Police officers who don't currently use Taser said they would like to carry one on duty, following appropriate training.

Nearly 40% of officers who responded said they had been assaulted on duty in the past two years. When asked if they thought carrying a Taser would have made any difference and made them feel safer, 63% answered yes.

"With Taser training and also the overt carrying of the yellow Taser, police officers are less likely to be assaulted."

"The most important thing is that of public perception. Taser is rarely discharged because of the rigorous training and the ethos that the discharge of Taser is as a last resort and used only against the most violent offenders,” he added.