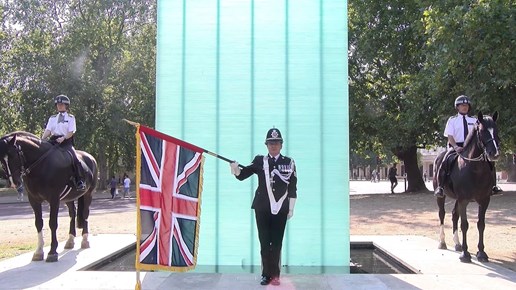 The 17th National Police Memorial Day Service remembering thousands of police officers who have died on duty was as emotional and moving as ever this year, despite being held virtually.

The online service – which featured police and religious leaders, politicians and families of fallen officers – was made even more poignant following the murder of Metropolitan Police officer Sgt Matt Ratana just two days before.

Prince Charles, who is patron of NPMD, paid tribute to UK police officers, saying they had “earned the admiration of the world” and would always have a "special place in the heart" of our grateful nation.

He said: “The dreadful incident in Croydon is an example of the dangers our police officers face daily. We owe our remarkable police officers the most profound debt of gratitude.”

Prime Minister Boris Johnson said: “When I think of our officers I think of the extraordinary courage they show every day. The officers we remember today represent the very best of us. They laid down their lives to prevent us from coming to harm. We own them a huge debt.”

Dave Stokes, Chairman of Leicestershire Police Federation, said: “I have been a Police Officer for 23 years, and consider myself to be a resilient person. However, watching the National Police Memorial Day Service always leaves me feeling emotional.

“We reflect on the officers we have lost, locally, nationally and internationally.

“Last week brought it home to all of us, that one our dearly loved Sergeants lost his life, leaving home and never to return to his family, friends and colleagues. Thousands of us do it each day, leaving home to police and support the public we serve.

“National Police Memorial Day is an emotional day, but a time to reflect and remember we stand united, thinking about every officer we have lost, and the families, friend and colleagues who are left without their loved ones.”

The service also received contributions from the Home Secretary, who gave a tribute and a reading, and the Archbishop of Canterbury.

The British Police Symphony Orchestra played ‘I vow to thee my country’, with more than 60 musicians who had proudly recorded their contributions while in isolation from homes across the UK.

More than 4,000 police officers who have died on duty were remembered.

Officers who have died on duty over the past year had their names read out. They are Sgt Matt Ratana and PC Chris Miller, of the Metropolitan Police; SC Resham Singh Nahal, of West Midlands Police; PC Matt Lannie, of South Yorkshire Police; PC Nick Dumphreys, of Cumbria Police; DC Jon Hicken, of Dorset Police; and PC Roy Buggins, of Police Scotland.

If you missed it, you can see the service again here: https://www.polfed.org/news-media/latest-news/2020/fallen-officers-honoured-at-national-police-memorial-day/