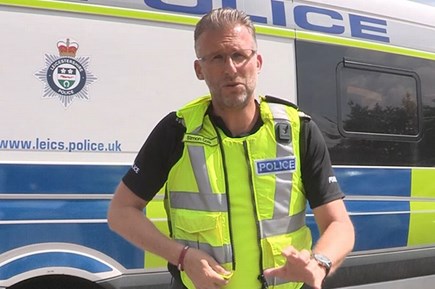 “I'm very pleased to see the courts are taking these incidents seriously.”

Leicestershire Chief Constable Simon Cole has described as “heartening” the strong sentences handed out to criminals convicted of weaponizing Covid-19.

A number of people in the force area have been jailed for spitting and coughing at police officers, while in some cases claiming to be trying to deliberately infect them with coronavirus.

Speaking to the LeicestershireLive website, CC Cole said: "Sadly we still see people who want to behave badly toward police officers who are doing their best to help them and the wider community.

"I'm very pleased to see the courts are taking these incidents seriously - in the most recent case the offender was sent to prison for 32 weeks for a variety of offences.

"I have written a victim impact statement to explain the impact of coronavirus on police officers who face people who threaten them with it in this way.

"All of us have body-worn video which shows people's behaviour.

"So the courts can look at what has happened from the officers' points of view and form a judgement.

"The judge in the most recent case made some very pointed comments about protecting public servants.

Among the recent cases in Leicestershire are a man who was jailed after claiming to be infected and coughing while being arrested.

A woman was jailed for two years for assaulting five police officers, telling one she hoped he would die and another that his loved ones would succumb to the disease.

And another woman spat at an officer while claiming to have coronavirus before kicking him in the stomach. She was jailed for nine months.