National Police Memorial Day is an annual event to honour police officers killed in the line of duty. In 2018 it took place on Sunday 30 September in Belfast.

Candles from each of the four nations of the United Kingdom of Great Britain and Northern Ireland, were lit by loved ones to remind us of the undying flame of devotion and commitment, exemplified by those whom we remembered.  Representing Northern Ireland: Joseph Ferguson and Susan Ferguson O’Neill, brother and sister of Constable Michael John Ferguson, RUC, who was murdered by the IRA aged 21 years in 1993.

Representing Wales: Jayne Griffiths, wife of Constable Terence John Davies, Gwent Police, who died aged 34 years, cycling home after a tour of duty when he was hit by a stolen car which failed to stop.

Representing England: Samantha Dixon and Parker Cameron James Dixon, wife and son of PC James Dixon, Thames Valley Police, who was killed aged 39 years, when the police motorcycle he was riding was involved in a road traffic collision.

Home Secretary Sajid Javid met with the families of fallen officers after giving a reading during the service.  He said:  “It was an honour to help pay tribute to the thousands of police officers and staff who have given their lives while serving and protecting us all, including those who died in the First World War.

“The National Police Memorial Service is an important and poignant reminder of the courage shown by the police each and every day.” 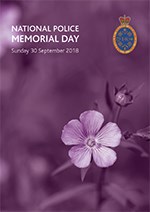 Words from our Patron HRH The Prince of Wales.