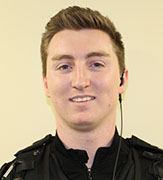 PC Collings had been sent to a domestic abuse incident. The report indicated that the drunk suspect had assaulted his partner, her vulnerable adult daughter and forcibly removed their two-year-old child from the house. It was also reported that he had returned and whilst carrying the child had punched and smashed a window, putting the child at risk and cutting his own hand. The suspect was a large man with a record of violence and was a serial domestic abuse offender.

The officer arrived at the scene single-crewed and spotted the suspect carrying his toddler in a nearby street. He engaged with the man, who was extremely aggressive and threatening causing a great deal of upset to the child who was screaming and covered in pieces of glass. PC Collings stayed calm and put the child’s welfare at the front of his mind. He managed to convince the suspect to hand his child to a neighbour. When the child was safe, despite being on his own, PC Collings challenged the violent suspect and tried to arrest him, but the man started to flick blood over the officer. He then punched him in the cheek, slammed him up against a garage door and kicked him in the ribs.

Back-up was 15 minutes away and during this time PC Collings restrained the suspect, despite the man using all his force to resist arrest. PC Collings was taken to hospital to be assessed fearing the risk of infection from the suspect’s blood.

Despite having been a police officer for just over a year, PC Collings showed great bravery and confidence in dealing with a violent and extremely dangerous man on his own whilst keeping a two-year-old child safe.