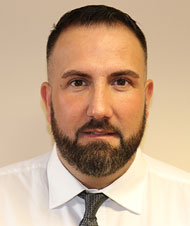 PC Neil Masheder interrupted his weekly shop to arrest a dangerous knife-wielding robber. As he was off duty, he had no uniform or protective equipment when he ran towards danger. He saw a stolen car that had been used in two knifepoint robberies. Realising the suspects needed to be stopped, PC Masheder rang the control room. He saw the driver returning and, after a violent struggle, got the offender under control and under arrest. The accomplices were soon located by attending officers.

West Yorkshire Police Federation Chair Brian Booth said: “These three violent and despicable criminals were playing a real-life game of Grand Theft Auto. They were armed and dangerous and had already robbed and threatened several people at knifepoint. If Neil hadn’t bravely intervened on his day off, they would have gone on to carry out a lot more violent crime.”