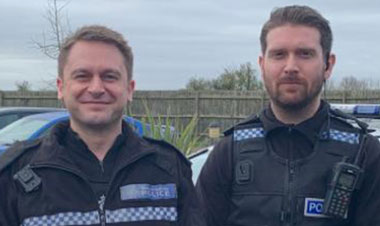 Brave officers rush towards man with a Samurai sword

PCs James Fitzmaurice and Andrew Hoey stopped a man armed with a ‘huge Samurai sword’ from being able to attack the public. They were flagged down by several people who had seen the man near Bedworth town centre. The officers challenged him several times to drop the weapon, but he refused. Finally, they used PAVA and Taser to stop him in his tracks and detain him. He was found to be carrying five blades in total.

Warwickshire Police Federation Chair Simon Payne said: “James and Andrew ran towards danger, knowing full well what they were facing. Their bravery and professionalism in protecting the public was at the forefront of their actions.”