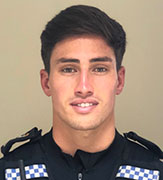 Police were called to reports of a teenager trying to force his way into a house. Witnesses said he had a knife and was trying to smash windows.

It followed an ongoing escalating dispute between two families, which was causing disruption in the local community.

PC Bell was the first officer on the scene, who saw that the suspect was being aggressive and was so fixated on entering the house that he had not noticed that police were present. PC Bell could not see the knife, but believed it was hidden on the man. Despite knowing the suspect had a weapon, PC Bell put himself in harm’s way by positioning himself between the man and the victim’s house. All parties were becoming more hostile to one another, but PC Bell remained calm to try to control the situation until further help arrived.

When the next officer arrived seven minutes later the suspect was arrested, and a knife was found tucked into his waistband. Further evidence showed that the victim’s family were trying to throw boiling water and a frying pan out of the upper windows in the direction of the suspect, directly next to PC Bell.

Without PC Bell’s intervention there was significant risk of harm to the people involved.