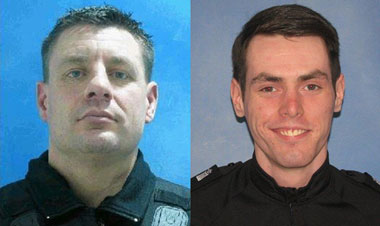 PC Jordan Tuck and PC Pete French stopped a shotgun-wielding man from killing children during a terrifying domestic incident. They were deployed to a house which ‘looked as it if it had been struck by a hurricane’, with ornaments and glass strewn all over the floors of every room. They were confronted by the armed suspect who refused to drop the weapon. The officers managed to evacuate three children and an adult. The suspect doused a shed in petrol and set light to it, threatening next door properties. As the officers waited for armed back up, the man dropped the weapon to the ground and appeared to be less agitated. It gave the officers the opportunity they had been waiting for, and they managed to get him and the shotgun under their control.

Suffolk Police Federation Chair Darren Harris said the officers had been understandably fearful for their lives, but that had not stopped them from saving the lives of everyone in the house.