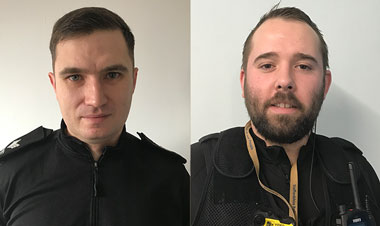 Selfless officers save woman with knife held to her throat

PC Kristian Avons and Sgt Amos Durose stopped an incredibly aggressive man from killing his partner in an horrific domestic abuse incident. They were only saved from severe injury themselves thanks to their stab vests. When the officers arrived, the man said he had a knife and they heard a woman cry out in pain. Forcing entry, they found him holding the knife to the woman’s throat and using her as a human shield. Sgt Durose wrestled the offender and received knife blows to his neck and stab vest. The man was finally subdued by a baton strike from PC Avons.

Staffordshire's Federation Chair Phil Jones said the officers had saved the woman’s life and at considerable risk to themselves.