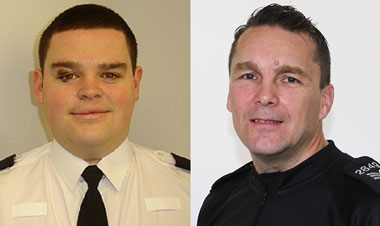 Hero cop walks through fire to try to save elderly man

PC Thomas Scourfield and Sgt Geraint Jenkins attempted to save the life of a 92-year-old man who was trapped in a burning building. PC Scourfield was off duty and driving back from the gym when he spotted the blaze. He heard screams and forced his way in, where he discovered a woman throwing water onto an elderly man who was on the floor. PC Scourfield guided the woman outside and went back in to attempt to rescue the man. Sgt Jenkins used soaked towels for protection to pull the man from the fire. He attempted CPR but the man was pronounced dead at the scene.

South Wales Federation Chair, Steve Treharne, said: “These two officers did everything they could to save this gentleman. They put their own lives on the line to respond to an incident that they both happened upon.”