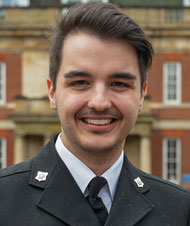 Probationer runs into burning building to save lives

PC Taylor Ladner had just six months’ service under his belt when he courageously dragged a woman to safety from a burning house. He was dispatched to investigate reports of what appeared to be a domestic dispute of a woman assaulting a man. At the scene he found a blaze and was told a woman and a child were trapped inside. The woman was intent on dying in the fire and resisted efforts by PC Ladner to drag her to safety. He searched for the child, who had, in fact, already escaped to safety and eventually got the screaming woman out.

Northamptonshire Police Federation Chair Sam Dobbs said the rescue was remarkable especially given PC Ladner had such little policing experience at the time. “Taylor placed his own safety behind that of the member of the public, despite knowing that she intended to harm herself and was being physically uncooperative,” he said.