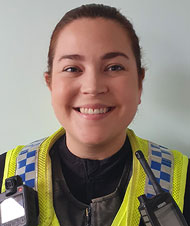 PC Laura Kelly single-handedly protected families in a busy restaurant from a crazed knife-wielding thief. She had begun to take details from the man, not thinking at this stage that he was the perpetrator, when she spotted a blade in his jacket sleeve. Thinking on her feet, took a few steps before radioing for assistance. The man then pulled out the knife and started to swish it towards families. PC Kelly used CAPTOR spray on the suspect and after two or three minutes she was joined by other officers and the suspect was detained.

North Yorkshire Police Federation Chair Rob Bowles said: “Laura showed the highest level of bravery and potentially risked her safety to enable members of the public, of which several were children, to make good an escape.”