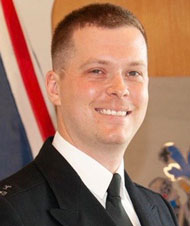 PC Stuart Outten suffered horrific injuries in a violent machete assault – but still arrested the attacker. It was while on the night shift in East London that he stopped an uninsured van. The driver initially stopped as instructed but then drove off. After a short chase, he stopped again. He punched PC Outten in the face twice and then brought out a two-foot-long rusty machete from the van, which he used to slash at the officer. Despite suffering six head wounds, a fractured skull, slash wounds, broken fingers and injured tendons, PC Outten fired his Taser at the violent van driver. After two shots he eventually subdued his attacker.

Ken Marsh, Metropolitan Police Federation Chair, said: “Stuart is an absolute hero who exemplifies everything good about being a police officer.”