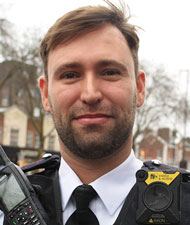 PC Andrew Wienand confronted violent jewellery thieves – whilst he was off duty and dressed in just his boxer shorts. He even had a pickaxe thrown at him during the incident last year – but still managed to scare the raiders off. PC Wienand, a newly qualified officer, was safely tucked up in bed in his South West London flat, when he heard a disturbance outside. He saw a jewellery shop about to be burgled by five men armed with sledgehammers and axes. Shouting to neighbours to call the police, PC Wienand ran at the suspects forcing the gang to flee on mopeds.

Ken Marsh, Metropolitan Police Federation Chair, said: “It was extremely brave of Andrew to challenge them and stop them in their tracks.”