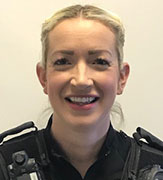 PC Bartle saw a man at the bottom of some steps outside the front door of a house. He turned to face the officer, who saw he was holding a long implement that was around 3 ft in length. He was waving it around and started to walk to the police vehicle.

PC Bartle got out and shouted to put the weapon down, but he continued so the officer released PD Chase out of the police van. The man had moved over to where an elderly lady was in a wheelchair and was trying to lift her out of the chair. PC Bartle shouted at him to leave the woman alone - he did but moved towards the officer who could see that the weapon he was holding was a stick.

Fearing that he was going to attack her, PC Bartle deployed PD Chase who jumped at the man who then swung the stick at the officer.

PC Bartle grabbed the stick, which had broken in half but was struck on the head. The man still had hold of the weapon, then grabbed a fire extinguisher and swung it towards the officer. As she put her arm up to protect herself, the extinguisher hit her, so she moved away, fearing that he was going to seriously hurt her.

The man then sprayed the fire extinguisher at her, causing the officer to lose her vision due to the force of the water and knocking her glasses off. The man followed PC Bartle as she backed away, so she tried to use her CS spray, but it was ineffective due to the water. The man then lifted the fire extinguisher up and smashed it on the police van, causing the windscreen to smash.

He carried on spraying the officer, who still could not see and was struggling to breathe, until other officers arrived at the scene.