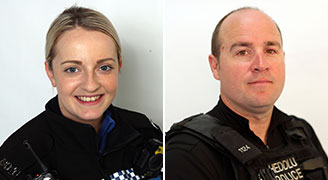 Officers brave fast river to try to save a child

A car was reported to have been stolen with a two-year-old child in it. Extensive searches of the town and surrounding areas took place, but the car was later found submerged and out of sight in the River Teifi. It had been located by the NPAS helicopter, which guided officers to its location.

PC Allen and PCSO Griffiths went into the deep water to try to save the child, despite instructions not to do so. The river was fast-flowing and extremely cold, with hazardous conditions. PC Allen entered the river fully clothed and waded through the water using a rope, fighting strong currents as he did so. PCSO Griffiths, who was also fully clothed, dived into the water and swam to the submerged vehicle. They both managed to climb on its roof and worked together to smash a window, before quickly removing the young child.

Sadly, the child had died despite the best efforts of the officers, other officers at the scene and medical professionals.

Both officers tried in vain to rescue the child from the river.  They showed the utmost determination and dedication to duty.