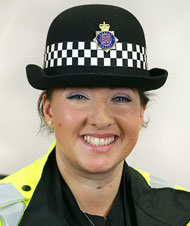 PC Roz Fricker was badly injured as she tackled a hammer-wielding thug. Still a probationary officer at the time, she responded to a serious disturbance in a block of flats. She heard a man shouting aggressively and kicking front doors. He began to march towards her, swearing and threatening. PC Fricker was struck in the shoulder by the hammer, but incredibly managed to deploy her PAVA spray and followed the offender, updating colleagues until he was located. Once arrested, he was found to be carrying a metal mallet, seven knives and a blade stashed in a tennis ball.