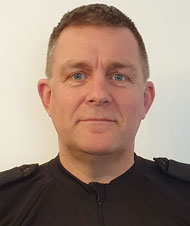 Derbyshire’s PC Geoff Marshall put his life on the line to save thousands of others, earning him a nomination for his ‘outstanding bravery’. He helped to prevent the dam at Toddbrook Reservoir from collapsing and overwhelming the town of Whaley Bridge below.

The dramatic events of August 2019 were played out across the world’s media. Days of heavy rain had sent water raging over the dam wall, taking with it a huge section of the structure. Engineers estimated it was likely that the entire 250-metre long dam would fail, sending billions of litres of water onto the town.
The emergency operation kicked in with officers in the potential flood area evacuating 1,000 people. At the dam, it was critical that sandbagging was completed to try to prevent the structure from collapsing.

PC Marshall volunteered to work on the spillway and secured himself with a rope while his colleagues passed sandbags down. For around two hours, officers and mountain rescue worked to place bags on the wall and buy enough time to temporarily secure the reservoir.

Derbyshire Police Federation Chair Tony Wetton said: “Were the dam to have failed it is highly unlikely any of those involved in the sandbagging operation would have survived. All the officers present elected that they could not stand by and risk the death of around 2,000 people, including colleagues, without doing something. There were numerous officers involved in the incident and I would like to acknowledge their bravery and outstanding efforts too but PC Marshall went over and above the call of duty while thankfully supported by his colleagues.”

The following morning an RAF Chinook helicopter was deployed and, over the next five days, 530 tonnes of aggregate were used to reinforce the dam wall. After a tense seven days, the dam wall was repaired, and the water pumped out.