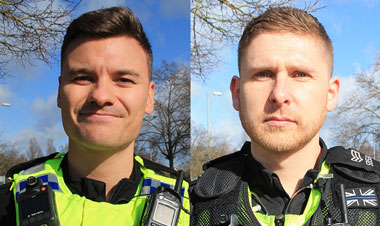 Sgt Cameron Mair and PC Jarrad Sainsbury risked their safety to stop a teenager from killing himself. The pair responded to a call from the 17-year-old’s distraught parents who said he had left a note. They told the Macclesfield-based officers their son was autistic and having issues, which may have explained his state of mind.

Using the ‘find my iPhone’ app, the officers tracked the youngster in peak commuter time and when he was in extreme danger.

Sgt Mair said: “As we approached through woodland, [the youngster] had actually moved into a life-threatening situation. Unfortunately, he gave a bit of resistance due to his distressed state. It was difficult to ensure he was safe but we managed to do that and get him to hospital.”

Cheshire Police Federation Chair Jamie Thompson said the officers’ actions had quite simply saved the young man’s life and got him access to the support he needed.