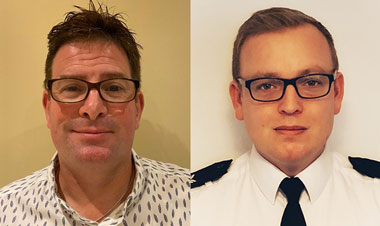 Sgt Dan Bramley and Sgt Nick Ashton-Jones did not hesitate to act when they saw police cars parked in the rear yard of a Cambridge police station being smashed up. Even though they did not have any protective equipment, they rushed out of the station to tackle a man who had a hammer in one hand and a firearm, which later turned out to be an imitation, tucked into his belt. PS Bramley, who has 14 years’ service with the force, tackled him to the ground and was helped by PS Ashton-Jones who had 30 years’ service and has now retired.

Their Federation Chair, Liz Groom, said: “These officers bravely ran towards danger, risking serious injury or worse. They were unaware that the firearm was an imitation. Luckily, they brought the incident to a safe conclusion.”