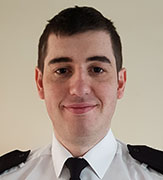 PC Willcox-Cassidy attended a call out to a house after a report of a violent domestic. A woman had called reporting that her son’s girlfriend was refusing to leave and was making threats towards her.

The lady suffered from severe learning difficulties and had initially pressed her alarm pendant. More calls were received from her - officers were dispatched, and an arrest made. PC Willcox-Cassidy, who had 11 months service, had attended with his crewmate and stayed on his own after the arrest to gather a victim statement from the lady.

Whilst giving her statement, the lady went into the kitchen and returned with a large kitchen knife, threatening to cut her own throat. She started lunging and making swiping movements with the knife towards her husband and the officer.

Realising the seriousness of the situation, PC Willcox-Cassidy immediately tackled the lady and grabbed her arm to stop her waving the knife. In the struggle the gas cooker was switched on. PC Willcox-Cassidy pressed his emergency button as he restrained the woman, who was still lashing out.

The officer used his Pava, which did not have any effect and told the woman he would need to use it again. In this volatile situation, he used Pava once more while ensuring that the lady’s husband was not close by. He kept talking and calmly asking the lady to let go of the knife, recognising that she was vulnerable.

Whilst PC Willcox-Cassidy was restraining the woman and updating the control room, he still had the foresight to ask the husband to turn off the gas. Eventually the knife was prised out of the woman’s hands and PC Willcox-Cassidy placed handcuffs on her, explaining that it was for her safety. He reassured her as he walked her outside and took her glasses off, showing care and compassion.