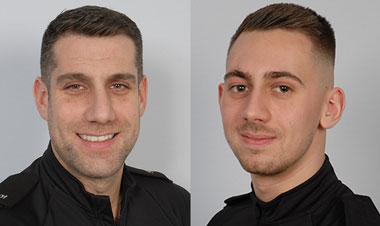 PC Dean Sobey and PC Rowan Birch were flagged down by a terrified woman in Bristol who said she had been threatened by a man armed with a gun. Officers confronted the offender who pulled the weapon from his waistband. They had no choice but to grapple with him and PC Sobey received injuries to his torso during the struggle.

Andy Roebuck, Chair of Avon and Somerset Police Federation said: “Dean and Rowan acted with incredible courage and professionalism. They knew they had to detain him – the potential for him to commit a really heinous crime was very real. And they did so quickly and decisively. We are very proud of them both.” The man was jailed for 21 months.