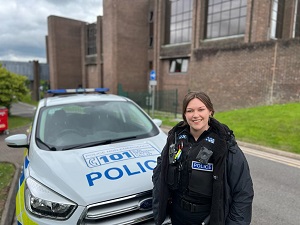 A West Mercia Police officer, who saved the life of a woman threatening to jump from a bridge over a dual carriageway, has been nominated for a National Police Bravery Award.

PC Rachel Paterson was first to arrive on the scene in Telford to find the woman threatening to throw herself onto the road 20 metres below.

She initially spoke to the woman and eventually reached her on the bridge when there was a struggle and the woman slipped.

PC Paterson, who has been an officer with West Mercia Police for two years and is based in Telford, held onto the woman’s legs and ankles to prevent her falling.

She was then joined by an off-duty officer who helped get the woman back over the railings to safety.

Her line manager said: “PC Paterson acted on instinct and I truly believe she made a brave decision which saved the life of the member of the public.

“Without her intervention, the female would have fallen 20m head first onto the carriageway below."

“Rachel represents the best of West Mercia Police and I’m delighted her actions have been recognised with a nomination for a bravery award.”