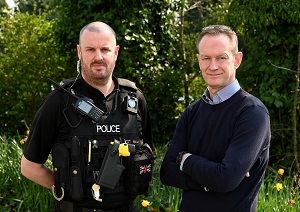 Two Thames Valley Police officers, who rescued an unconscious woman from a burning building, have been nominated for the National Police Bravery Awards.

On the evening of Tuesday 29 October 2019, PC Ben Eastment and PC Derek Ingram were on patrol when they heard a call over the radio about a house fire in Burnham, reporting that people were still within the property.

PC Eastment and PC Ingram decided to self-deploy to the incident as they were just around the corner from the location. On arrival at the scene, they found the front door to the property was open and they could see smoke coming from upstairs.

Displaying enormous courage, the officers entered the house and saw that the fire was coming from a bedroom that appeared to be locked. On searching the first floor of the property, the officers discovered an unconscious female in another bedroom. Her teenage son appeared and said to the officers that “the children are next door”.

PC Ingram suspected that children were in the locked bedroom and he forced open the door. A mattress in the room was on fire but thankfully there was nobody there. PC Eastment ran to the police vehicle to retrieve an extinguisher but, by the time he returned, the fire had grown and smoke was filling the upstairs of the property.

PC Eastment had difficulty seeing PC Ingram through the thick smoke, but he managed to grab hold of him by his legs. In the meantime, PC Ingram had taken hold of the unconscious woman and together the officers pulled her downstairs and out of the house as the fire blazed around them.

They also made sure that the teenage son had escaped the burning property safely and it transpired there were not other occupants in the house.

The officers placed the woman into the recovery position and monitored her breathing. The fire brigade arrived shortly after and took over the role of providing first aid.

Both officers suffered smoke inhalation and received oxygen therapy for an hour following the incident.

PC Ingram said: “We were the first on the scene, before the fire brigade. Neighbours told us there were still people inside the house and maybe children. We’re both family men, so something clicked and we got our heads down and did what had to be done.”

PC Eastment said: “I feel extremely honoured to be nominated for such an award. Though I feel I was just doing my job, and I don’t think either myself or PC Ingram had a second thought about running into the house to save the lady inside.”

“Ben and Derek no doubt saved the woman’s life by putting themselves in harm’s way – and they also made sure that no one else was going to come to any harm.

“They went above and beyond the call of duty and we were all relieved that they were not seriously hurt themselves.

“We commend them on their quick-thinking and bravery.”