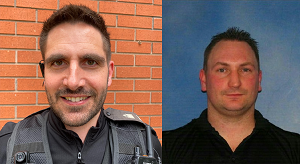 Two Suffolk Police officers, who tackled a man armed with a knife as he ran into a busy town centre, have been nominated for the 2022 Police Bravery Awards.

PCs Craig May and James Moughton responded to reports that a man armed with a knife was running around the centre of Ipswich last year.

The officers work on the South Operation Sentinel team - an ANPR-equipped team with the main aim of disrupting criminality through intelligence-led policing.

They soon spotted the suspect and asked him to stand still and show them his hands, but he ignored their requests and headed towards the town centre.

Fearing a potential threat to life, PC Moughton challenged the suspect once again and “red-dotted” him with his Taser.

PC May immediately recognised the high-risk nature of the situation due to the location and the likelihood of Taser being ineffective due to the thick coat being worn by the suspect, so tackled the man and forced him to the ground.

The officers then quickly brought the incident under control, handcuffed the suspect and recovered a large wooden-handled kitchen knife with a seven-inch blade.

The individual, who smelled of alcohol, was transferred to custody where he became agitated and spat in the face of the duty custody sergeant.

Suffolk Police Federation secretary Ben Hudson said: “The knife the officers recovered had a lanyard attached for weapon retention, an indication of intent, so who knows what these two officers prevented that night?

“I’m really proud of the officers who showed they are willing to take calculated risks and act decisively in tactical situations, putting the safety of the public before their own.”

The man was jailed for 19 months at Ipswich Crown Court last November after he admitted assault by beating, possession of a knife, four offences of fraud by false representation and handling stolen goods.