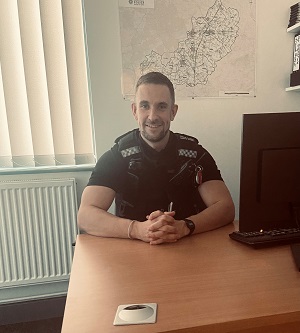 PC Nick Lewis of Nottinghamshire Police has been nominated for a National Police Bravery Award, after he showed outstanding bravery at two separate incidents.

A 12 year old girl presented herself to staff at a supermarket in Nottingham stating that she did not want to return home after a family fall out.

Staff tried to stay with her until police officers arrived but she took off and ran away from staff whilst police arrived to search for her. The girl was spotted at a busy junction and PC Lewis, single crewed at the time, attempted to catch up with her.

By the time he caught up to her, she began running across the grass verge far ahead in front of PC Lewis and proceeded to run down the steps and jump into the River Trent.

The Trent at this location is a wide and fast flowing river with dangerous undercurrents. PC Lewis used quick thinking and acted selflessly as well as utilising his previous open water swimming skills.

Without hesitation, he took off his stab vest and equipment belt and jumped into the river after the girl. The child was struggling to keep her head above the water, due to the thick and woollen clothing that she was wearing - her head dipping under the water on a number of occasions.

PC Lewis swam out to her and due to the amount of weight the water sodden clothes had taken on, had to battle and swim hard to ensure they both returned to the side of the river.

PC Lewis did not stop attending to the child until she was out of the water on the bank and in the care of colleagues who had arrived at the scene.

Only after he had completed the rescue did PC Lewis make an assessment of his own health and well-being.

A woman was seen to jump off a bridge and into the centre of the River Trent, in an attempt to take her own life.

PC Lewis, who was tutoring a very young in-service colleague, arrived on scene just as the female jumped into the river.

The officer utilised his previous experience of open water swimming and managed to prevent the woman from going under the water but experienced some resistance from her as she tried to kick away from him to continue to go under the water.

This made the rescue more hazardous for PC Lewis to keep them both afloat. The combination of the personal strength of the officer in the water and his calming words towards to the female, prevented the situation from becoming worse.

Simon Riley Chair of Nottingham Police Federation said: “PC Lewis acted without any second thought or hesitation twice in the space of 2 months, in order to save the lives of two people.  Nick showed huge personal bravery in entering the water, without any thought for his own safety on both of these occasions in order to effect the rescue of 2 females in difficulty, in what is an extremely dangerous stretch of the River Trent.  Without his selfless actions and bravery, both would have undoubtedly drowned.”