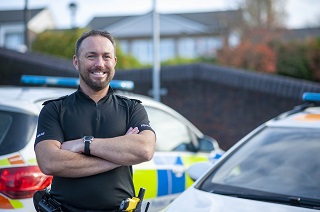 A Northumbria Police officer, who disarmed a man who was threatening to shoot his own mother during a domestic incident, has been nominated for The National Police Bravery Awards.

Sergeant Graham Yare and two other officers attended the 999 call out in Gateshead in June last year and found the man prowling around in the property’s backyard.

Police call handlers had earlier heard him shout he was ‘armed up’ and could hear what appeared to be gunshots in the background during the emergency call.

Chillingly, he was confronted by what appeared to be an Uzi submachine gun being pointed directly at him. The weapon was later found to be an air replica, but Sgt Yare had no way of knowing that at the time.

Drawing his Taser, the officer instructed the man to drop the weapon, but he refused to comply.

Sgt Yare then deployed his Taser, but this had little initial effect as the man again pointed the firearm at the officer’s head.

Sgt Yare managed to recycle his Taser and deploy it for a second time, which disabled the man into dropping the weapon. The other officers at the scene then managed to bring the man under control, kick the gun away and detain him.

A later search of the property unearthed a vast cache of replica firearms, including an AK-47 style firearm, and several knives and long blades.

Northumbria Police Federation Chair Jim Gray said Sgt Yare had shown incredible bravery, given he wouldn’t have known whether the weapon being pointed at his head was real or not.

“From the 999 call, he was well aware the suspect in this incident had guns and other weapons,” Jim said, “but of course, he couldn’t have known they were air replicas.

“Graham is not a firearms officer – he put himself at significant personal risk to ensure the safety of the man’s mother and the man himself, his police colleagues and other members of the public."