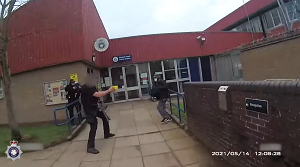 A group of officers from Northamptonshire Police have been nominated for the National Police Bravery Awards, after they worked together to respond to a bomb threat.

In May last year, an individual called the force control room stating he would visit his local police station and he had a bomb.

Shortly after the phone call, front office staff noticed the man outside the police station with a ruck sack on his chest and his hand inside.

Area Firearms Officers were deployed to the scene to commence early negotiation and began to contain the area. As negotiations continued, the offender stated he had nitro glycerine, which increased the threat.

The full evacuation of the police station and surrounding area took place, and a detention strategy was formulated and communicated to the officers.

Though it had not been established that the threat was credible and how detonation was to be carried out, with a possible risk to their lives, the officers immediately moved towards the offender and worked together to distract and detain him. The bag was removed and quickly dragged away.

The individual was charged with making a bomb threat and a call conveying false information under the Malicious Communications Act 1988. Last year, the individual pleaded guilty to both charges and was sentenced to three years in prison.

Northamptonshire Federation Chair Sam Dobbs said: "All officers go on duty never knowing what they will be sent to help with. It’s one of the attractions of our vocation. Armed officers always know that the dimension of their work will bring them face to face with life threatening situations like this one. They are rigorously selected and trained but the judgment on whether and when to use the lethal option takes courage, often accompanied by fear.

"This incident came so close to the trigger being pulled - something I know which haunts the officer - and they wholly deserve this thanks and recognition because true courage knows fear - and allows unarmed officers and the public the relative safety we enjoy."