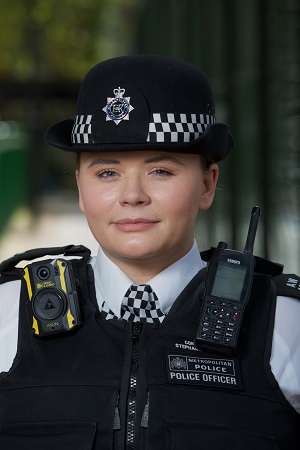 A Metropolitan Police officer, who continued chasing a violent suspect even after she was stabbed, has been nominated for The National Police Bravery Awards.

PC Stephanie Clarke was running a plain-clothes operation in Westminster on 4 October 2020 with another officer when they saw two teenage boys running out of a grocery store with the storekeepers screaming after them.

Suspecting they had been trying to rob the store, one officer got into a struggle with one of the boys while PC Clarke tried to help detain them.

It was then she felt a pain in her side.

The boys managed to get away and, thinking she had been punched, PC Clarke chased after them. She then noticed they had a knife. She kept running but realised she was bleeding from the abdomen and that one of the boys had stabbed her.

PC Clarke radioed her colleague to warn him that they were carrying knives and that she was injured. The suspects, who were both 15 years old, were detained a short time later with the assistance of firearms officers. The boy who stabbed the officer was later sentenced to three-and-a-half years in a young offender institution.

PC Clarke said: “My colleagues were concerned I could have had an internal bleed, so I went to the trauma unit and had a scan. It turned out the knife had gone in about two inches, into stomach muscle, but luckily hadn’t gone into anything major.

“My supervisor, probably quite sensibly, wouldn't let me back out on the street until I had my stitches removed, but after that I got back out there.

“I found the court process tough, but afterwards I went to the young offender institution to meet the boy who had stabbed me and that was actually quite rewarding and gave me some closure. The rehabilitation process seems to have worked for him.

“I do feel really privileged to do this job and I do think you can really help people, so I'm just trying to keep doing that. But I'm really grateful for this nomination.”

Metropolitan Police Federation Chair Ken Marsh said: “What a courageous hero and an example of the fantastic officers we have out there on the streets every day keeping Londoners safe.

“Despite suffering a gruesome injury, PC Clarke still chased after a suspect. It was very fortunate that she wasn’t injured more seriously and she was incredibly brave in trying to detain these suspects even after she had been stabbed.

“She ran towards danger and I commend her courage and immense professionalism. We are very proud of her.”