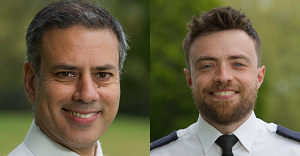 Three Metropolitan Police officers, who courageously acted as human shields to save an injured teenage girl at an illegal rave, have been nominated for a National Police Bravery Award.

In February 2020, PC Ben Shaylor, PC Ali Khan and PC James Whittaker were on night duty when they were called to attend an illegal rave in an industrial unit off the North Circular Road.

PC Shaylor said: “We had a rough idea of numbers, but when we turned up it was a whole different ballgame. There were 1,000 to 1,500 people inside the warehouse and another 1,000 out on the street, trying to get through this one gate.

“We stood at the gate and stopped people coming in, but they were charging at us and we were having to fight them back. We weren’t in any sort of protective kits at this point, just in normal uniform.

“Our supervisors were then made aware that a young girl had taken a fall inside. I went inside with PC Khan and PC Whittaker, just the three of us, where there’s 1,500 people, to try and help this girl. She was two stories up, on a wet metal fire escape where she had slipped while she was trying to leave. Some of the crowd thought we were there for them, so they were hostile towards us.

“When we got to the girl, who was just 15, she had a really badly dislocated knee. She was in a serious amount of pain. So we start treating her, trying to splint her leg and carry her down, and then the crowd started throwing missiles at us.

“They were throwing metal gas canisters, bricks, masonry, trying to do us some proper harm. The girl was in a lot of distress, she’s panicking, she’s in pain. And the only thing that we can do, bearing in mind we weren’t in helmets, was to position our bodies so the missiles would hit us on our backs, on the back of our heads, so that she didn’t get hit.

“We managed to get her splinted up, lifted her up and then carried her off the fire escape and out through the crowd. We got her in the ambulance, put some kit on and then ran back in.”

The officers then managed to pull out a teenage boy who was unconscious from a suspected drugs overdose. They got an airway into his mouth and gave him life-saving first aid. Both he and the injured girl made full recoveries.

PC Shaylor, PC Khan and PC Whittaker were sore and bruised following the incident, but luckily did not suffer serious injuries.

PC Shaylor said the three of them were humbled to be nominated for the national Award. He said: “We don’t go out looking for recognition, I think people are doing far braver things. But it’s brilliant to get recognition. It’s humbling. We were doing what we would always do and luckily it had the best result for the two youngsters.”

Metropolitan Police Federation Chairman Ken Marsh said: “I am extremely proud of these three officers, who put their own safety to the back of their minds to save the lives of these young people, giving emergency first aid and acting as human shields.

“This was an extremely difficult situation with a volatile crowd and the outcome could very easily have been much worse.

“Many congratulations to Ben, Ali and James – they are very worthy nominees.”