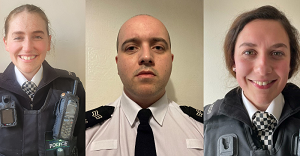 At 5am on 29 June 2021, police received a call reporting two men attempting to force their way into their property, in possession of firearms and bladed weapons. The two suspects were described as nearly being through the door. The caller and partner had fled onto a second-floor balcony, fearing for their lives.

PC Charlotte Grisenthwaite and PC Rosie O’Sullivan arrived at the scene within minutes and entered the communal door. They were immediately confronted by two armed suspects wearing balaclavas, who were attempting to escape from the flats. The officers engaged the suspects and the men brandished knives. The officers drew their batons and incapacitant spray and there was a violent struggle.

Sergeant Thomas Jurgis and Sergeant Nicola Hughes then arrived at the scene, forced entry to the communal door and also engaged the armed suspects. The officers activated their emergency button and further support arrived.

Following a ferocious struggle with the officers, both suspects were disarmed and arrested for aggravated burglary. Numerous weapons were recovered from the scene.

Both suspects were charged and remanded for a number of offences. The offenders pleaded guilty at Crown Court, receiving 18-month and 12-month sentences in Youth Offenders institutions.

Merseyside Police Federation Chairman Tony Fairclough said: “This is an outstanding example of teamwork, bravery, determination and professionalism by all the officers involved and exemplifies how our police officers put themselves in harm’s way on a daily basis to protect the community of Merseyside.

“The fact that many lethal weapons were found at the scene highlights what a dangerous situation this was.

“We are very proud of Charlotte, Rosie, Thomas and Nicola. They are very worthy nominees for The National Police Bravery Awards.”