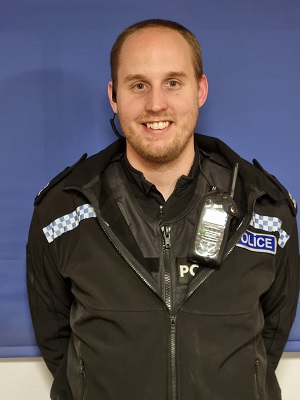 Two Leicestershire Police officers, who successfully detained a man who was threatening to kill them with a hammer and knife, have been nominated for the National Police Bravery Awards.

Around midnight on 17 September 2020, PC Rykki Townsend and an officer who has asked not to be named left Mansfield House Police Station to return to their cars after finishing their shift.

The officers saw a man standing in the front car park, wearing a high-visibility police jacket and a black balaclava, and carrying a hammer. The man began to walk towards PC Townsend and asked if he was a police officer. He replied that he was and asked if he could help.

The man then became verbally aggressive, saying several times that he was going to kill the officers and that he would not let them leave. PC Townsend managed to get into his vehicle and start his engine, which caused a brief moment of respite, and the man retreated towards the gates.

Neither officer could leave, they did not have PPE or their radios on them, and there was also a risk to the public, who were passing by just a few feet away.

Assessing the situation and risk, PC Townsend called 999 from his car to try to get assistance. While he remained on the phone, his colleague manoeuvred his car in order that he could effectively negotiate with the man, who was now standing on the opposite side of the gates, in full public view.

The man still had the hammer in his hand and then he suddenly produced a knife. He told one of the officers he would kill him and leave him in a ditch for his colleagues to find.

The officer remained calm and through tactical communication he managed to keep the man talking to him until other officers arrived, thanks to the clear updates that PC Townsend gave to the control room.

It became apparent on arrest that the subject had more knives on him. The man remained too violent to be dealt with in custody, and so was charged and remanded by the Court.

At court he was found guilty of possession of an offensive weapon and sentenced to four years in jail.

Leicestershire Police Federation Chair Adam Commons said: “Rykki and his colleague remained calm when faced with what must have been extremely difficult and challenging circumstances.

“They acted quickly and effectively as the incident unfolded before them, without the use of their PPE, and managed to secure an emergency response that led to the suspect being detained.

“The outcome could have been tragic, were it not for these officers’ professionalism and bravery.

“We are very proud of the work of this dedicated duo.”