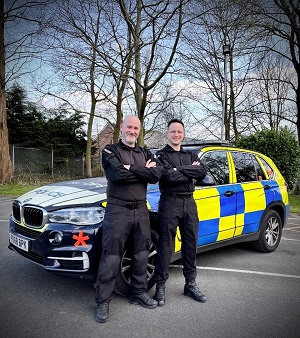 Two Lancashire Police officers, who ran into a burning building before extinguishing a fire and saving a man’s life, have been nominated for the National Police Bravery Awards.

In the early hours of Sunday 4 April 2021, armed response officers PC Simon Wheeler and PC Paul Rogers-Thomas attended a report of a fire in Skelmersdale. They had been told that a flat was on fire with people reported to be inside, smoke could be seen coming from the property and the smoke alarm was sounding.

The officers were first on the scene, arriving within four minutes of the call.

They saw smoke coming from a slightly open window of a ground-floor flat, which had numerous flats above it. Having been told that the occupant was inside, the officers realised this person was in grave danger.

Rather than wait for the fire service, PC Wheeler decided to remove his body armour and force his way through the window into the dark, smoke-filled house.

On entering the hallway, PC Wheeler saw smoke billowing from the kitchen, where he saw a burning chip pan sitting on a hob that was still alight. He recognised that the fire would spread quickly, so he managed to extinguish it and turn the cooker off.

He then made his way to the front door to let in PC Rogers-Thomas, who had run to get a first-aid bag from the police vehicle. The officers grabbed a moment of fresh air before both running back inside the flat to search for any people inside.

They found the very intoxicated resident asleep under a blanket on the sofa, oblivious to the danger he was in. The officers lifted him up and carried him outside to safety.

Still being the only emergency responders on the scene and unable to ascertain if anyone else was in the flat, the officers went back in to search the remaining rooms - thankfully no one else was inside. The first fire engine arrived at the scene 10 minutes later.

Lancashire Police Federation Chair Rachel Hanley said: “Once again this incident shows how police officers are much more than crime fighters. We are life savers.

“The brave and selfless actions of these quick-thinking officers undoubtedly saved the life of the householder and prevented a potentially catastrophic outcome for the other residents in the block of flats.

“I thank Paul and Simon for their actions in going above and beyond the call of duty. They are very worthy nominees.”