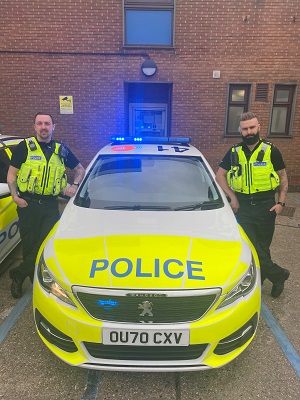 Two Hertfordshire police officers, who saved the life of a disabled man badly burned in a flat fire, have been nominated for the National Police Bravery Awards.

The man was already fighting for his life after receiving significant burns in the fire when PCs Ashley Crowe and Matthew Henry-Randell arrived on the scene.

They stayed “calm and professional as chaos occurred around them” to initially carry the man away from the fire before giving him life-saving CPR.

The officers were on duty when the incident happened last year in Cheshunt.

Firefighters were already on the scene when the officers arrived to find two vulnerable people were inside the property, which was well alight.

A woman was rescued via a fourth-floor window, but the man was still inside the block and severely injured.

PC Henry-Randell, who has served Hertfordshire Police for three years, said: “I ran up the two flights of stairs to get to the firefighter and the victim, who was on the floor badly burnt and clearly not breathing.”

The officers carried the man down a flight of stairs and took it in turns to give him CPR.

PC Crowe, who has been an officer for five years, said: “He didn’t have a pulse and wasn’t breathing. We carried on with CPR until we had help to carry him out of the burning building to the grass area outside the flats.”

A defibrillator was used to resuscitate the man before he was taken by air ambulance to hospital. The officers then registered all of the residents to ensure no one else was still in the building before helping with road closures.

Their actions have been recognised with a Chief Constable’s Commendation.

Temporary Detective Sergeant Mark Pritchard, who nominated them for the commendation, said: “While it can be described as chaos around them, they remained calm and professional and continued to update colleagues and the Force control room.

“The officers in turn performed CPR until they were relieved by doctors and paramedics. The casualty was stabilised on scene and transported to hospital to continue assessment and treatment.

“The officers remained at the scene and assisted with crowd control and securing the scene. Their prompt attendance and quick, decisive actions in performing first aid saved the life of the male and their actions in this distressing situation should be commended.”