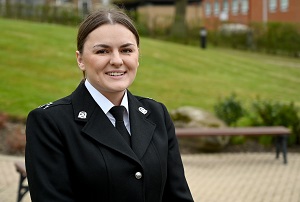 An off-duty Hampshire Police officer, who dragged an injured and violent man off a busy motorway carriage, saving his life, has been nominated for the National Police Bravery Awards.

At 4pm on 14 November 2020, PC Janaway, who had only been a police officer for a few months, was off-duty and driving along the M3 to get to work.

Coming towards Winchester, she saw a vehicle parked in the hatched area that separates the slip road from the first lane of the motorway. She then saw a man in front of the vehicle, frantically waving his arms. There was another man lying on the ground, partially in the live lane, which was her lane, and she had to brake hard to avoid hitting him.

Once she positioned her vehicle in a safer place, she got out to assist the driver of the stopped vehicle, who said that the man had stepped out in front of him and he had hit him. They both dragged the man out of the live lane and to relative safety on the hard shoulder.

The injured man was bleeding from his head but was conscious. Another motorist approached and said that the injured man had just tried to attack him with a hammer and that the man had also been fighting with someone else.

PC Janaway then saw a hammer in lane two of the motorway. The injured man started to talk and made an attempt to get up and move towards the carriageway, so PC Janaway and the member of the public assisting her had to restrain him to stop him moving into the live lane.

The injured man then started to try to pull PC Janaway down towards him, attempting to sexually assault her, and she had to use further force on him to prevent it. The man was restrained until on-duty officers arrived and handcuffed him.

It transpired that the man had attacked his father with a hammer immediately prior to this, while in a van on the M3 and had tried to attack others in a violent mental health crisis.

Hampshire Police Federation Chair Zoë Wakefield said: “Jordan showed immense bravery and integrity by stopping to assist with this incident while off-duty, at great risk to herself.

“She was only months into being a police officer and had no personal protection equipment whatsoever.

“Jordan almost certainly prevented this man’s death by pulling him out of the live carriageway and then keeping him down, even though he was a large, strong man. We are very proud of her actions.”