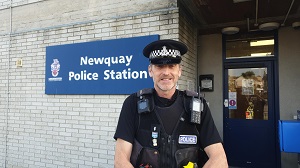 A Devon and Cornwall Police officer, who courageously saved the life of a colleague who had been horrifically doused in petrol and set on fire, has been nominated for the National Police Bravery Awards.

PC Alan Lenton and a colleague were acting in support of two bailiffs on 11 September 2020 as they tried to evict a man from land near Newquay.

The bailiffs had twice before tried to serve the eviction notice but had been met with violent threats and a refusal to comply.

PC Lenton and his colleague then accompanied the bailiffs on their third attempt to evict him later that morning, but the man still refused to pack up and leave the site.

The incident escalated extremely quickly when the man threatened to set the officers on fire. He backed up his threats by opening a glass bottle with petrol inside it and standing close to a naked flame, which he had fired up from a home-made cooker.

Realising the danger they were all in, the officers rushed forward to prevent the man from carrying out his threats.

However, as they did so, the man managed to douse them in petrol from the bottle he was holding, which instantly ignited PC Lenton's colleague into flames.

PC Lenton knew he had to act at once to try and save his colleague's life, and despite having the petrol on his uniform and at risk of catching light himself, he dragged his partner away from the main fire and into some long grass.

He then rolled the officer around on the ground to extinguish the flames while the bailiffs stepped in to pin the man to the ground.

Once PC Lenton had removed his colleague's burnt clothing and had administered first aid, he went to the assistance of the bailiffs to get the man fully under control.

The man later received a 10-year custodial sentence for his actions, which the sentencing judge described as 'wicked, deliberate and extremely violent'.

PC Lenton has also received a Chief Constable's High Commendation, a Commendation from the judge in the case and a Society For The Protection Of Life From Fire Award.

“This was incredible bravery and quick-thinking and it’s highly likely that Alan saved his colleague's life during this horrific incident," he said.

"He went to help his partner while covered in petrol himself; it could have ended tragically for both officers, but Alan put danger to one side to do what he needed to do.

"Being able to think clearly enough to roll his colleague in the long grass and get the burning clothing off him shows real clear thinking in a highly challenging situation.

"It was excellent police work, and Alan is a very worthy nominee for The National Police Bravery Awards."