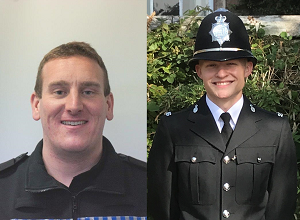 Two Cumbria Police officers, who were punched and pushed down a flight of stairs by a violent man but still recovered to make the arrest, have been nominated for the National Police Bravery Awards.

On 6 May 2021, PC Joseph Tidmarsh and PC Jamie Long attended an address in Carlisle following a call from a violent, aggressive man who stated he wanted to assault or kill someone.

The officers entered the man’s building through the communal door, which had been smashed in, and walked up the stairs to knock on the man’s door.

The man immediately barged out of his flat into the officers and punched PC Long, before pushing PC Tidmarsh backwards. Both the assailant and PC Tidmarsh fell down the flight of stairs, through the door and into the garden.

The man continued to be violent and returned to his feet. Both officers were injured: PC Long suffered only minor injuries, while PC Tidmarsh had extensive bruising and pain.

Despite this, PC Tidmarsh and PC Long focused on apprehending the man and eventually managed to restrain him using Taser and PAVA spray.

The man was subsequently charged with a number of offences and was given a 12-month suspended sentence. He was ordered to pay the officers £200 each in compensation.

Cumbria Police Federation Chair Paul Williams said: “Despite being in pain, Joseph and Jamie remained collected and professional in a very violent situation.

“They communicated clearly with the assailant in what was a very intense and scary scenario. This man was intent on harming or killing someone, and the officers bravely managed to get him off the streets.

“We are very proud of them - and they are worthy nominees for The National Police Bravery Awards.”