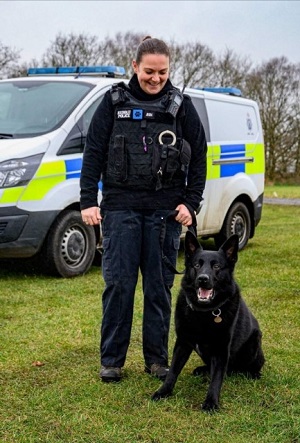 An off-duty Cheshire Police officer who physically restrained a woman who was intent on running into moving traffic on a motorway has been nominated for the National Police Bravery Awards.

On 1 November 2021, PC Stephanie Allinson was travelling home from a shift on the M53 in poor weather conditions when a car in front of her drove straight into the central reservation at about 80mph, spinning out of control before stopping in the live lanes of the motorway.

Thinking it was a road traffic incident where the driver had lost control, PC Allinson pulled over to the hard shoulder, illuminated her emergency equipment and got out to help.

The female driver then got out of her crashed car and seemed hysterical - making it clear to the off duty officer that her intentions were deliberate. PC Allinson immediately realised this wasn’t a normal RTC but someone apparently trying to take their own life.

​​PC Allinson called the control room to report the incident and as she was doing so the woman tried to run into the live lanes of moving traffic. PC Allinson immediately sprang into action and wrestled with the woman on the motorway, stopping her from throwing herself into the traffic.

PC Allinson restrained the woman, who then broke down, and PC Allinson consoled her until traffic officers arrived. It transpired this woman was a high-risk missing person from Merseyside and colleagues ensured she got the help she needed.

Cheshire Police Federation Chairman Jamie Thompson said: “Stephanie found herself in a very stressful and dangerous situation when she was technically off-duty, but her quick thinking and assessment of the situation saved at least one life, by preventing a woman from running into the live lanes of the motorway.

“Who knows what carnage could have ensued? This may well have caused significant injury or further fatalities to other road users.

“While Stephanie is very modest, she most definitely went above and beyond the call of duty, putting her own life at risk to help another. The brave and selfless actions of Stephanie represent the professionalism and selflessness of police officers in their duty to protect the public and she is fully deserving of this nomination.”