This year’s Care of Police Survivors (COPS) Service of Remembrance was held yesterday (1 August) at the National Memorial Arboretum in Staffordshire.

The event began with the arrival of the Police Unity Tour cyclists, including officers from Derbyshire, who were led into the arboretum by the Blue Knights, a fund-raising group of serving and retired police personnel with a motorcycle interest.

The chair of Derbyshire Police Federation Tony Wetton said: “I couldn’t be more proud of so many of our members nationwide who, as exhausted as they are after the last 18 months, committed to completing the 180-mile bike ride to raise funds and show their support.”

Each rider wore a wristband dedicated to a specific officer and, Tony explained, this year’s event was particularly poignant after last year’s was cancelled due to the pandemic.

There were also addresses from Samantha Dixon, who read her poem ‘Never A Passenger’ about her life without her husband PC James ‘Dixie’ Dixon who died in 2017 and Ali and Sandi Gibb, whose son Daniel died in 2010 on his way to his first shift with his father. Last year’s service, had it gone ahead, would have marked the 10th anniversary of his death.

The West Midlands Brass Band played throughout the service and there were two songs from singer Diane Whylie before the laying of wreaths.

The COPS chair of trustees, Sir Peter Fahy QPM, closed the service and the families and colleagues of fallen officers then moved to The Beat to place red roses on the trees that have been planted as memorials to their loved ones.

The memorial service followed a visit last week by HRH The Prince of Wales who unveiled a new memorial at the arboretum. The 12-metre sculpture, designed to resemble a slightly ajar door with cut-out leaves to represent the lives of lost officers, will provide a place for family, friends, colleagues and members of the public to remember fallen officers. 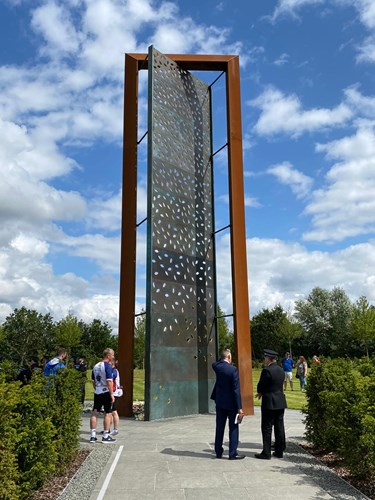