More than three quarters of residents in Chesterfield, who took part in a recent survey, say they oppose the Government’s decision to impose a pay freeze on police officers.

Toby Perkins, Labour MP for Chesterfield, spent the summer Parliamentary recess surveying voters in every ward in his constituency on a range of subjects, including the police zero per cent pay rise which was announced in July this year.

And Tony Wetton, chair of Derbyshire Police Federation, is calling on the Government to listen to public opinion on the issue.

“On behalf of the 1,850 constables, sergeants, inspectors and chief inspectors I represent in Derbyshire Police, I would like to express my sincere thanks to Toby for asking his constituents for their views on the disgraceful decision to refuse a pay rise this year for police officers – those same officers who have worked tirelessly throughout the pandemic to keep the public safe.

“I am also grateful to those members of the public in Chesterfield who have shown their overwhelming support for their police officers by insisting that they should receive a fair pay rise.

“We will continue to campaign on behalf of officers to get the Home Office and the Treasury to reverse their decision to ‘thank’ those officers by imposing a real-terms pay cut.  We will also continue to insist on the introduction of a proper, fair, transparent system of deciding police officer pay rather than the sham we currently have which we feel we can no longer engage with.

“The Government urgently needs to listen to the public and invest properly in policing and give meaningful support to officers.  Policing has been telling them this for long enough – stop putting the public at risk.”

Explaining why he carried out the survey, Mr Perkins explained: “I undertook my ‘Listening to Chesterfield’ survey this summer so that I could hear from the ‘silent majority’ of my constituents. Often I hear from the same people over and over again, via email or social media, and I wanted to get a more diverse, and hopefully representative, range of opinions from my constituents.

“What struck me the most regarding the police pay freeze is that the vast majority of people I spoke to were unaware of it, and quite shocked to learn that officers were getting a real terms pay cut. With 77 per cent of people opposing the pay freeze, it clearly shows that Chesterfield supports and respects the work that officers do and want them to receive fair remuneration.

“I will now be writing to the Home Secretary and the Chancellor to make them aware of the people of Chesterfield’s views on this and to urge them to return to negotiations with the Police Federation so that an agreement over a fair pay rise can be agreed.”

In response to the pay freeze, the Police Federation of England and Wales passed a vote of no confidence in Home Secretary Priti Patel and withdrew from the Police Remuneration Review Body (PRRB) saying it was no longer fit for purpose.

“We had a very constructive meeting and I hope that other MPs in the county will also get behind the police officers who day in, day out, work tirelessly to serve and protect their communities, facing dangerous and life-threatening situations,” says Tony.

“They just want to feel that their efforts are appreciated and that they are being treated fairly. But sadly they currently feel totally let down by the Government.” 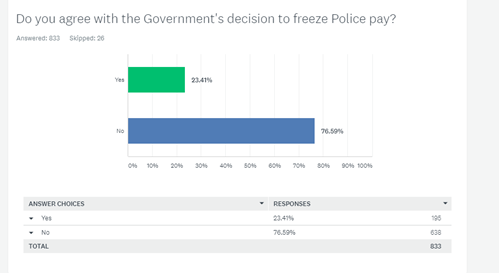