A Derbyshire PC who took part in the Queen’s Baton Relay ahead of the Commonwealth Games has described the experience as a “privilege and an honour”.

Geoff Marshall was selected as a “Hometown Hero” to carry the baton through the Buxton leg which took place in the town’s picturesque Pavilion Gardens.

He was nominated by Bolsover District Council in recognition of the critical role he played in saving the town of Whaley Bridge from disaster during the Toddbrook Reservoir crisis in 2019, when it was feared the 250-metre long dam would collapse.

Initially he thought he had missed the opportunity to take part but a change of plan saw him picked to carry the baton less than 10 miles from the scene of his heroics three years earlier.

He said: “Back in April I got a message saying I hadn’t been successful but I was still really pleased that someone had thought well enough of me to nominate me in the first place.

“Then in June I went on holiday and I was in Bulgaria when I received another message saying they would actually like me to do it, that things had changed and that they would like me to carry the baton in Buxton.

“Within a very short space of time, they sent me the uniform and on 11 July I went up to Buxton for the relay.” 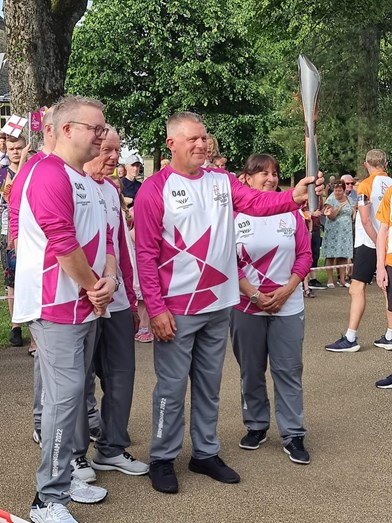 Geoff Marshall with the Queen’s Baton in Buxton

Geoff was one of five baton-bearers who took part in the Buxton leg of the relay and was cheered on by family members and friends including former comrades from his time in the armed forces.

He said: “I didn’t have to run a great distance but that wasn’t really the point, it was just an honour and a privilege and a great experience to carry the Queen’s Baton.”

The 16th official Queen’s Baton Relay was an epic 294-day long journey covering 87,000 miles across all 72 nations and territories of the Commonwealth ahead of the Games which were held in Birmingham from 28 July to 8 August.

It began on the steps of Buckingham Palace last October at a special ceremony attended by the Queen and the Earl of Wessex and finished at the spectacular opening ceremony in Birmingham on 28 July.

In October last year, Geoff was presented with a regional award at the national Police Bravery Awards for his part in the Whaley Bridge crisis.