A police officer who was slashed twice in the face as he tackled a man under the influence of drugs has been honoured at the Police Bravery Awards along with two colleagues who came to his aid.

PCs Steve Reid, Weronika Korbiel and Stephen Fowkes were joined by fellow nominees from across the country at a Downing Street reception hosted by Home Secretary Priti Patel who praised their “incredible courage”. 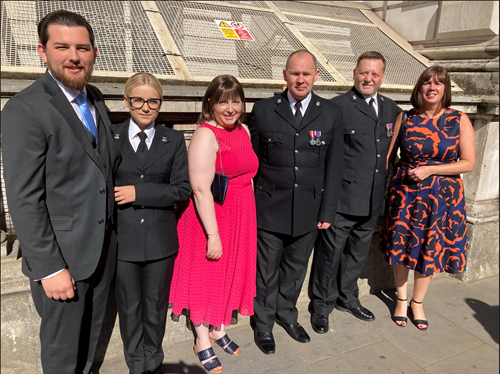 The brave officers and their guests outside the gates to 10 Downing Street. 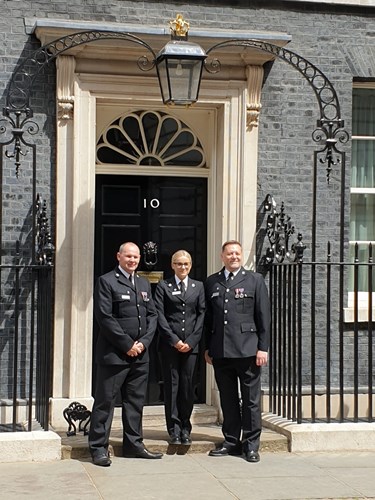 The three brave officers outside No 10: Steve Reid, Weronika Korbiel and Stephen Fowkes.

Steve, who is also a Derbyshire Police Federation rep and health and safety lead, suffered horrific injuries when he was attacked with a knife by a suspect after he and Weronika were called to a robbery.

As Steve attempted to arrest the suspect, he was slashed by the man with a knife and came close to being “blinded or killed” as the blade narrowly missed his eyes and a major artery.

His newly qualified colleague Weronika then took charge of the situation before back-up arrived, and PC Stephen Fowkes used his Taser to eventually subdue and arrest the individual.

In putting forward Steve for the award, Sergeant Jonathan Dillon said: “While reviewing the body-worn video, I was immensely proud of Steve for moving forward without hesitation into the home of a member of the public after this violent offender forced his way in.

With Steve seriously injured, Weronika ushered people back into their homes while keeping Jefford in sight. 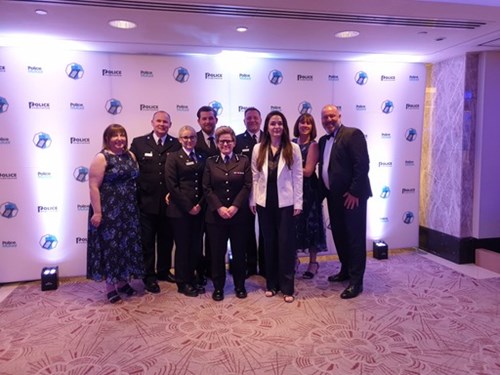 When reinforcements arrived, Stephen eventually used his Taser to reduce the risk of more officers being injured.

After returning to work when he had recovered from his injuries, Steve became a Derbyshire Police Federation workplace representative so that he could offer support to colleagues and in December he took on the role of the branch’s health and safety lead.

Speaking after the awards ceremony, Tony said: “Our three nominees showed real courage in an extremely dangerous situation and are all fully deserving of this recognition.

“It was an honour and a privilege to spend the day with them and their partners. We are all very proud of them.”

Speaking at the Downing Street reception, Ms Patel told the nominees: “I am delighted to be able to celebrate with you, once again, the incredible courage of a remarkable group of police officers.

“Your work involves an extraordinary degree of sacrifice that should never be taken for granted. These awards play an important part in ensuring your deeds are recognised.

“I would like to thank the organisers of the 2022 awards, the Police Federation, and Police Mutual for their continued support for the event.”

The officers also received warm praise and a message of thanks from Prime Minister Boris Johnson.

He said: “These acts of bravery, honoured here today by your colleagues and the public, are outstanding and in the finest traditions of policing. I salute each and every one of the fantastic nominees at the awards. You are truly the best of the very best.

“It is absolutely right and proper that we honour and celebrate the work of our brave men and women in uniform who work day in and day out to protect the public.

“The progress we are making towards recruiting 20,000 more officers gives me full confidence that together we will make our streets safer. From the bottom of my heart, thank you.”

Speaking at the awards ceremony, Police Federation national chair Steve Hartshorn said: “Tonight, we heard extraordinary stories of bravery, selflessness and acts of courage that are not just part of the job.

“The bravery shown by these nominees is truly outstanding. From putting their own lives at risk to save others, facing violent attackers and terrifying weapons, to rescuing people from perilous situations in fast flowing water or stranded hundreds of feet in the air, they have faced danger head on.”