Derbyshire Police Federation health and safety lead Steve Reid has been reflecting on his “amazing experiences” at the Police Bravery Awards.

Steve and fellow Derbyshire nominees Steve Fowkes and Weronika Korbiel travelled down to London for the awards event last week. 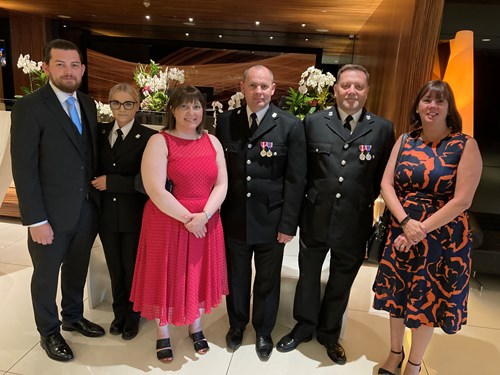 Steve Reid (third from right) and his wife Rachel with Weronika Korbiel (second from left) and partner Jacob Callow and Stephen Fowkes and wife Melanie.

The trio were shortlisted after an incident in which Steve Reid was slashed twice in the face as he tackled a man under the influence of drugs. Steve Fowkes and Weronika were the first to go to his assistance.

Speaking after the awards event, Steve said: “It was just an amazing experience from start to finish really.

“We went to Westminster in the morning and had a tour around the House of Lords and House of Commons and then we sat in on Prime Minister’s Questions - what a time to go down!

“We then had lunch with our two MPs Margaret Beckett and Pauline Latham in the Pugin Room looking out onto the Thames.

“They were just wonderful and engaging and we talked about the incident which led to our nominations and everything was fantastic.”

The following day saw Steve Reid and his wife Rachel, Steve Fowkes and his wife Melanie, and Weronika and her partner Jacob Callow attend a special reception in Downing Street hosted by Home Secretary Priti Patel. 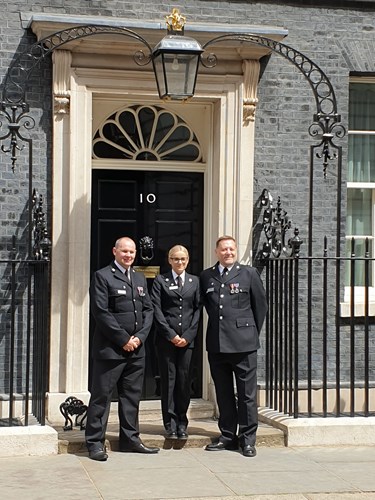 Left to right: Steve, Weronika and Stephen outside No 10.

Steve said: “We arrived on a bus and were escorted past the gates and just to be able to see the outside of Downing Street was amazing but to go inside was just surreal.

“We all had our photographs taken in front of Number 10 and then went through and then you realise that you are sitting in the garden of 10 Downing Street having canapes and soft drinks and you’re taking the whole thing in and soaking up the atmosphere. It was brilliant.

“And everyone was there for the right reason, being rewarded for bravery and their actions. We all did our own things.”

The reception was followed by the awards ceremony later that evening at a hotel in central London.

Steve said: “But, for all the stories of bravery, it was inspirational just to be there with everyone and having a fantastic night.

“People ask us what the highlights were but every day and everything we went to was a highlight.

“And for us it has been so long that it was just that final bit to celebrate.”