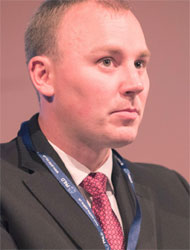 PC James Ellerton and his family endured a living hell when he was hauled into court and threatened with five years in prison, just for doing his duty.

The Merseyside officer was in an unmarked vehicle in Liverpool City Centre in 2015 when he witnessed a stolen scrambler bike being ridden recklessly. “The rider was racing through the city with no lights, on the wrong side of the road and performing a wheelie – I knew it was not a case of if, but when, someone would be seriously injured or killed,” said PC Ellerton.

He made a split-second decision to place his van in the bike’s path to prevent it heading back into the centre. The rider tried to evade him, but was knocked off at low speed by the officer and subsequently arrested.

PC Ellerton thought he would be protected by the law but instead he was investigated and charged with dangerous driving. His training was deemed irrelevant by prosecutors. He feared losing his job, his liberty and that his pregnant wife and child might be at risk from local criminals if his address was made public.

Thankfully he was found not guilty. He returned to duty after 14 months but found himself second-guessing his actions and terrified of a repeat. He was diagnosed with anxiety and signed-off.

The Federation seeks a change in the law to recognise the advanced training of emergency responders and exempt them from prosecution just for doing their jobs.