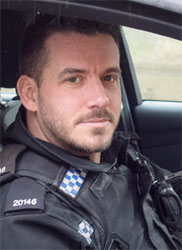 Hampshire traffic officer PC James Holden found himself in the dock after he pursued a teenager who was at the wheel of a stolen van.

The officer gave chase to a 19-year-old who drove at high speed, jumped several red lights and travelled the wrong way up a dual carriageway. The offender, who had 145 previous convictions, crashed through a railway barrier before being halted by another police patrol.

Following the incident in Portsmouth in 2011, PC Holden was investigated on suspicion of dangerous driving and put on trial by the Crown Prosecution Service. He was made to endure "12 months of hell" before being acquitted. During his trial, a jury was shown footage of the pursuit taken with a camera inside the officer’s car.

PC Holden’s barrister Mark Aldred remarked after the case that the legal system recognises the risks involved in pursuits but "unfairly" places the blame on the shoulders of the officer involved.

Hampshire Federation Chair, John Apter commented that PC Holden had been a "highly trained advanced police driver who had brought somebody to justice". No complaints had been made about his driving and no members of the public were injured in the pursuit. "No police officer is above the law, but James was prosecuted for doing his job", John added.

We are working with MPs to enshrine into law protections for emergency response drivers following their training in 999 situations.