In 2016, Sean (a police officer with 20 years’ service) stood in the kitchen with the intention of committing self-harm with the sharpest knife he could find. He knew he didn’t want to die- the thought of his loving wife and kids stopped him crossing that line – but he was overwhelmed with emotion, isolation and frustration and, for a few minutes at least, felt like hurting himself was the only way he could show people he was struggling.

This desperate cry for attention was the culmination of more than a year of dealing with his mental health, following a 100 MPH car crash while in pursuit of a suspect.

Initially, Sean talked to everyone about the accident - believing that it would help him process what happened and move on. But, although he couldn’t see it, as the months passed Sean’s behaviour became increasingly erratic. He was provoking arguments with his wife and shouting at his kids for no reason. Everyday tasks – like changing his clothes or brushing his teeth – began to seem pointless.

“People I had known for years were refusing to look at me as we passed in the corridor – because they didn’t want to talk. Or they would say “you alright?” and carry on walking, without even slowing down for an answer. If you are already feeling low, that just makes it worse and reinforces the idea that people don’t care. It’s a missed opportunity because that could have been the time you were ready to open up or were reaching breaking point and they could have helped.”

“You have to make time. If you are working a late shift, you do 3pm to 1am single crewed. Everyone knocks off at different time depending on what they have been dealing with. You go home: everyone’s asleep. You wake up and they are already at work or school and then you’ve got to leave before they get home to do it all again. There is no outlet, and the pressure builds up.”

It took an ultimatum from his wife- to get help or not to come home- for Sean to realise how bad things had become. He contacted the Employee Assistance Programme and, with a tentative diagnosis of PTSD, was referred to Surrey’s Force Psychologist.

“Having a problem with your mental health or having PTSD isn’t career limiting. That’s what stops a lot of people from speaking out- the idea that you won’t be able to join the dog unit or work with firearms. But it’s not true. And there is loads of help out there - Employee Assistance Programmes and charities like Police Care UK and the Police Dependants Trust are great when it comes to mental health. You join the job to help people, so it can be really hard to admit that you need help yourself – but there are organisations who do it really well.”

He is full of praise for the Western Division of Surrey for the innovative way they are supporting officers like him. The Neighbourhood Policing Investigation Team are officers who, for largely medical reasons, are unable to take on a public facing role. They take on office-based tasks, such as gathering information on missing persons and conducting voluntary attendance interviews, freeing up officers who would otherwise be stuck in the police station.

“You are still part of a team – you have that support and people around you who know what you are going through, and you are still doing the job. It gives you a sense of being, and a purpose. You are using your skills and contributing – helping progress investigations and get colleagues back out patrolling the streets.”

Following his experience, Sean has launched two Facebook groups- UK Police PTSD Network and UK Police MH Support Network – chat rooms for officers to talk about their experiences with others who have been through similar things.

“Even if you can’t open up to someone in person, its sometimes easier online. You don’t even have to post – just go in and you'll see aren’t alone and be able to see what advice others are giving.”

Officers in need of immediate support are encouraged to contact the Samaritans on 116 123, or one of the other organisations below. 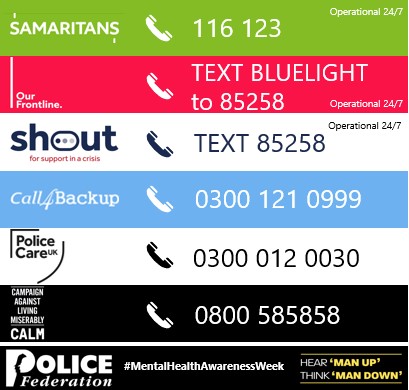