"Impossible to give the level of attention that victims deserve" 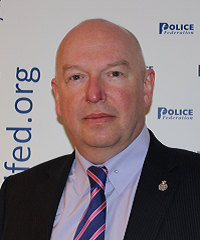 DS Paul Large, a long standing detective with the Metropolitan Police, has one word to describe the current state of investigative policing – “crisis”.

He worries that a fall in officer numbers and rising workloads for those who remain amounts to a vicious circle for police forces – at a time when the role of the detective has never been more important.

“We need to look at the ever-increasing remits and at the added scrutiny that detectives are under as all of that equates to stress, which is not a great advert for anybody wanting to become a detective,” says DS Large.

He believes the detective role is essential in today’s world, particularly given the rise in cybercrime. However if officers are overworked and pulled in too many directions, then their ability to do the job well is affected.

He adds: “For example around rape and child abuse investigations, workloads are simply so big that it’s impossible to give the level of attention that the victims deserve. That is incredibly frustrating for the victims and also for the officers themselves. We need to ensure that detectives are dealing with just the investigations they are trained to deal with, without distractions.”

DS Large would like the maximum amount of live investigations a detective can adequately handle to be quantified, to give the right level of service. He continues: “I am in my last year of service – if I could use one word to describe how I feel about the job at the moment I would say ‘frustrated’.”

Remember, your workplace reps are there for you should you need support and guidance.

You can find out more about the Police Federation National Detectives’ Forum here.