"Female officers stayed on the front line to cover every day policing activity as they weren’t allowed to join male colleagues on the miners’ strike". 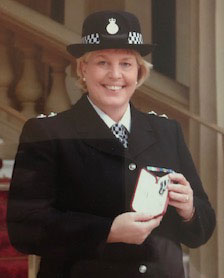 Retired Inspector Christine Longmore served with Kent Police and North Yorkshire Police in a career that spanned three decades. During that time she encountered some male prejudice and inequality, some significant support from male colleagues and encountered the extraordinary experiences of the 1984 miners’ strike. She was later seconded to the UN in 2001-2003 to combat post-war sex trafficking in Bosnia and training the Bosnian Police – work for which she was awarded the Queen’s Police Medal.

"I joined the Kent Police Cadets in 1975, becoming a regular officer in 1977. I’d been a front line officer for a few years when policemen I worked with were despatched to picket lines all over the country during the miners’ strike to prevent conflict. Female officers stayed behind at stations to cover all policing duties as they weren’t allowed to go to police the miners’ strike.

“It was an unusual but liberating time. I was a Patrol Sergeant by then on a shift. Early in my career there was some resistance to women working on patrol in the mid-70s and many women didn’t work on shifts. When I’d joined in 1975 there were still women police units which only dealt with women and children issues – policewomen did not even interview offenders; they were only allowed to deal with victims.

“Things started changing gradually during the latter 1970s and the miners’ strike allowed police women to demonstrate their full capabilities.  All the able-bodied male officers were sent to police the strikes and officers deemed to be the “sick, dying and the women” stayed behind on shift. But it opened up huge opportunities for female officers as they had the chance to perform all the roles the men had traditionally undertaken. It provided opportunities to join the CID for example. There was a mixed reaction amongst senior officers about women undertaking the full range of policing roles.

“When you’re young you don’t really understand what you’re fighting against in terms of male attitudes. There was sexism in the police service but also at every level of British society. There were cases where police management just got rid of women officers if they showed any perceived signs of weakness or did not fit in, or if they challenged the status quo. I just put my head down, shut my mouth and got on with the job.

“In the latter years of my career I got involved with the North Yorkshire Police Federation, becoming a representative for women Inspectors. We fought as a National Federation on issues such as Inspectors’ pay and whilst we didn’t get the results we wished for, it was good to have been involved and it improved pensionable pay. The Federation fully supported me throughout my service against several spurious allegations by members of the public and once by a fellow officer. I was grateful for their support and guidance – it was a worrying time for me but the Federation was brilliant”.