“Please keep up your good work for those serving today on our ever thinning blue line”. 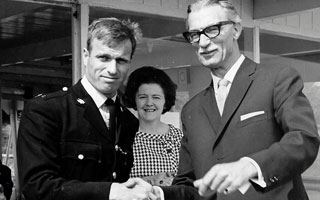 Ken Wright, a retired DC served 30 years with what is now known as Essex Police. When Ken was assaulted on duty, Essex Police Federation stepped in to help.

“I served with Essex for 30 years and was very grateful for the way Essex Police Federation looked after us through many turbulent years. I was especially thankful to them after I was viciously assaulted in Southend in the early hours of a morning when, as the night duty CID officer, I chased a car thief who had decamped from a stolen car.

“I had rugby tackled him to the ground, but he then kicked me in the head and ran off. I chased him to some underground garages and during a subsequent fight he repeatedly struck me with his mobile phone. This was in the early 1990s when these phones were like house bricks with a stumpy aerial which caused 10 separate wounds to my head and face.

“I had my personal radio with me and had called for assistance and once the cavalry arrived the man was detained. Our force federation rep told me to apply for criminal injuries compensation, which I did. I was offered an award but the federation advised me to appeal, as due to the assault I was having repeated migraine attacks, which I never had beforehand.

"The federation made an appointment for me to see a neurologist at a local private hospital. He examined me and wrote a very detailed report of his diagnosis in which he clearly stated that I could suffer from psychological episodes for the rest of my life. Thankfully after suffering from migraines for some years, over time these have lessened to some extent. At my appeal I was represented by a federation solicitor and after the hearing I was awarded a far greater amount, which helped towards my recovery. Had the federation not fought my corner I wouldn’t have received this.

“I served my full 30 years in ‘the job’ and reluctantly left in 1997. It’s with grateful thanks to our Police Federation, who stood by us and is still there, and thank you all, past and present representatives for not only the one incident I have mentioned, but for much in the past as well. Happy Centenary, and please keep up your good work for those serving today on our ever thinning blue line."